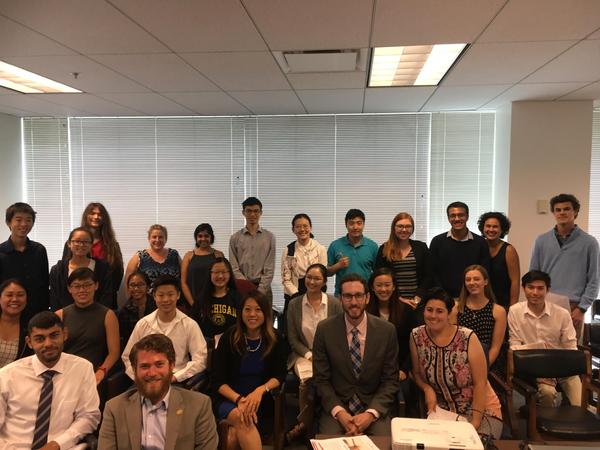 Willpowered Woman focuses on empowering women. We educate at high schools, universities, colleges and businesses to prevent intimate partner abuse and support women who have been affected.

We were founded in October 2015 and in that time, with the help of many volunteers, we were able to accomplish a lot. Read our 2016 Impact Report HERE

The CEO, Caitlin D'Aprano has been working on Willpowered Woman full-time since October 2015 and has decided it's time to expand! We want two full-time staff so we can have an even bigger impact and start to put our future plans into action.

We are raising $4,000 towards our 2018 fundraising goal of $180,000 to hire a second full-time person. This person will be the Impact Development Director and will focus on outreach, creating partnerships in the education sector and creating more community impact.

Our Founder Caitlin D’Aprano is an intimate partner abuse survivor.

After only 4 weeks of marriage, her husband strangled her 3 times. She left with nothing; no visa, nowhere to live and no job. She had escaped to an emergency shelter and was looking for temporary housing. When she contacted nonprofits, the first question she received was, “Do you have children?” When her answer was no, 98% of nonprofits said they couldn’t help her.

There was every reason to go back to her husband: love, family, a roof over her head, but she prevailed against all odds. The amount of willpower it took her to persevere was tremendous, it felt like a force of nature. That’s when Willpowered Woman was born.

It's important to help women without children because 1 in 4 women in abusive relationships become pregnant against their will (forced pregnancy). Willpowered Woman wants to prevent a woman from having to go back to her abusive partner, which increases her risk of forced pregnancy.

This starts with awareness. No one knows about forced pregnancy. No one actually talks about it. When we spread awareness and women know to look out for it, they can protect themselves from pregnancy (using birth control they can hide from their partners). Caitlin only came across the problem from her own personal experience and listening to other women’s stories in support groups. Forced Pregnancy traps the woman in the relationship and she will stay on average 3-5 years longer because she has the welfare of her child/children to consider. This has negative effects on the child and the woman's mental and physical health, especially if her life is in physical danger.

Addressing forced pregnancy can have a huge ripple on effect. 15 million children witness intimate partner abuse each year. 3.5 million of these children were born as a result of forced pregnancy. If every woman can identify forced pregnancy when it’s happening and take preventative measures, this gives the woman time to figure out how she is going to leave and further down the line, find a healthy relationship. This means that 3.5M children can be brought into a healthy family without violence. Abuse is a learned behavior: young boys can have healthy male role models and grow to be authentic, empathetic men.

Thank you for supporting Willpowered Woman: without you, our mission would not be possible.

A $50 donation covers phone support for our clients.

A $100 donation covers outreach to find women who need help.

A $200 donation covers the cost for one woman to attend one of our empowerment classes.

$300 covers 1 month of desk space for our new team member.

$500 covers part of the cost for our part-time fundraiser.

$3,600 covers a full year of desk space for our new team member.

You'll start to receive updates in your email on Help Expand the Willpowered Woman Team's progress.